Kobo’s primary objective is to focus on the exploration and development of the Kossou Project, (permit PR0852) which covers 147.365 km2. The Kossou Project is located in the Yamoussoukro and Bouaflé regions of central Côte d’Ivoire. The permit is located approximately 22 km to the northwest the capital city of Yamoussoukro and 250 km the financial capital of Abidjan. Importantly, the key gold showings are located within 7 to 10 kilometers of the Yaouré open pits and process facilities.

The 2023 work program will focus on drilling of the Road Cut Zone (“RCZ”) and other targets including the Jagger, Kadie and CZ. The Company plans to drill 10,000 m as part of the Phase 1 exploration plan based on a succesful raise in early 2023.  A Phase 2 drill program will expand drilling on primary targets delineated in Phase 1 drilling and will test other geochemical and trenched showings.

Our immediate proximity to the Yaouré gold mine operated by Perseus Mining gives Kobo a significant advantage in terms of development options as we progress the project. The Yaouré Gold Mine is reported to contain gold resources (Measured and Indicated) of 2.11 million ounces (47.9 million tonnes @1.37 g/t Au), with 1.56 million ounces in Proven and Probable Reserve. The most recent feasibility study completed on the project concluded an 8.5-year mine life with an all-in sustaining cost of $745 per ounce (www.perseusmining.com). 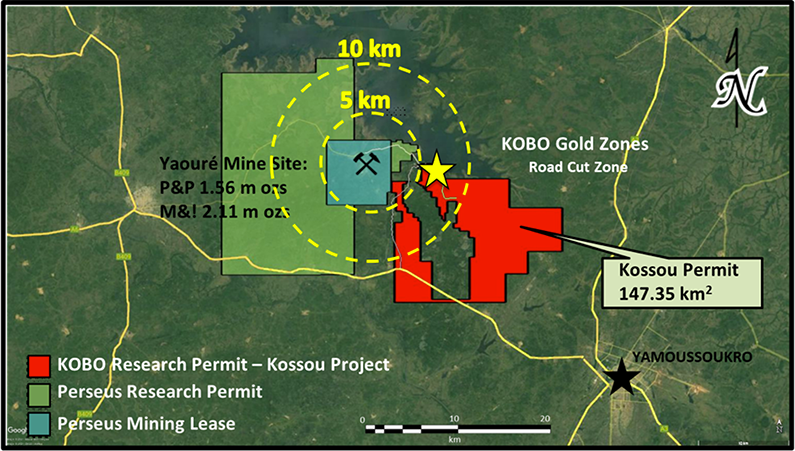 Kobo began exploration efforts in 2016 initially examining an alluvial/eluvial deposit in what is designated the “Beach Zone”.  A series of 164 pits were dug and the contents of the pits were hand washed for evidence of gold.  All but 9 pits contained contained visible gold.  Subsequent mapping and prospecting work led to the discovery of the Road Cut Zone (“RCZ”).  The strong rock sampling results and early indications of significant potential mineralization led Kobo to expand this exploration program and additional mapping, rock and soil sampling resulted in the delineation of at least 7 significant zones of potential gold mineralization.  Exploration work is ongoing. 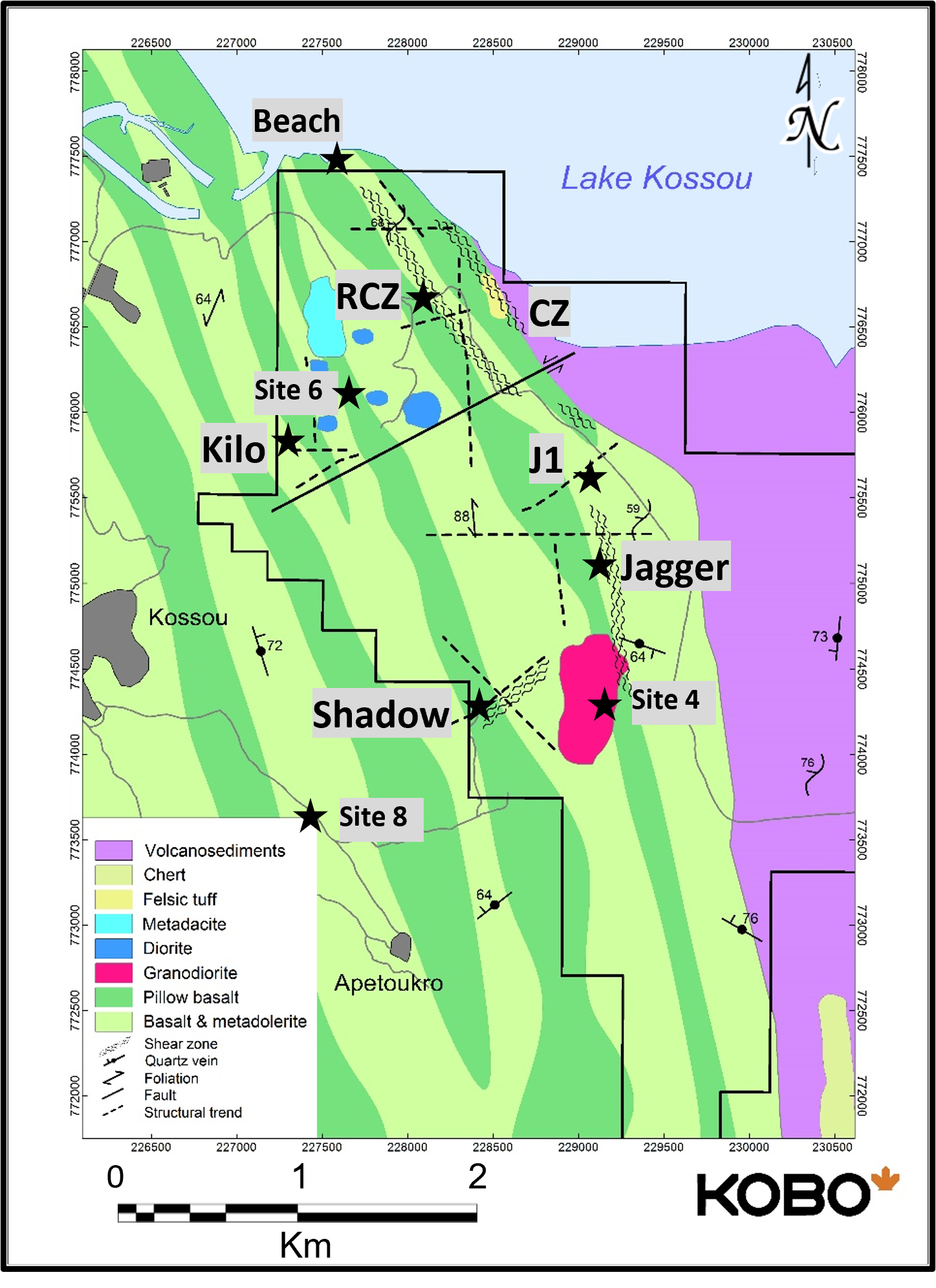 The Road Cut Zone is our primary target to date.  The RCZ was initially discovered during early reconnaissance of the Permit and lies within strongly altered volcanic rocks heavily cut by quartz and quartz-carbonate veins/veinlets.  Exposure along the road indicate this mineralization can be traced over a length of at least 110 meters and with a demonstrated width of approximately 15 meters.  The original exposure returned 4.64 gpt Au over an 18.2 meter continuous chip sampling program.  Further sampling to the north and south of this exposure along the road cut confirmed early gold results.  Additional sampling has confirmed grades and end extent of the showing.  Gold in soil geochemistry indicates that this target can be traced over a strike length of 1.7 kilometers and is a prime target for drilling.  Recent trenching has also exposed a new area that assayed 11.30 g/t Au over 4.0 m

Additional mapping, sampling and structural geology work has elevated the RCZ to an immediate drill target for the 2023 drill program. 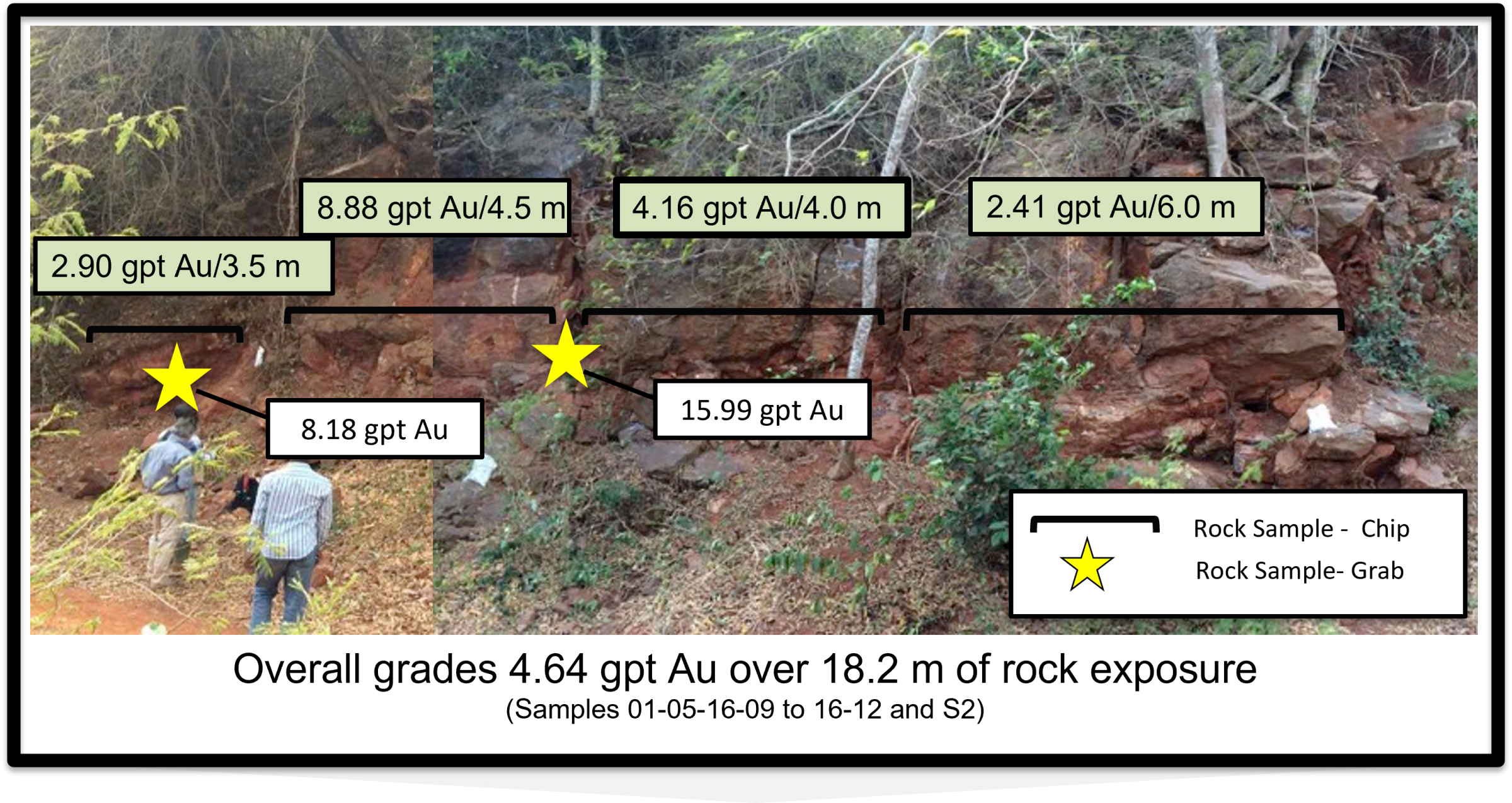 All geochemical targets are supported with rock samples or extensive artisanal mining.

These geochemical targets for the basis of the proposed drill program of 2023. 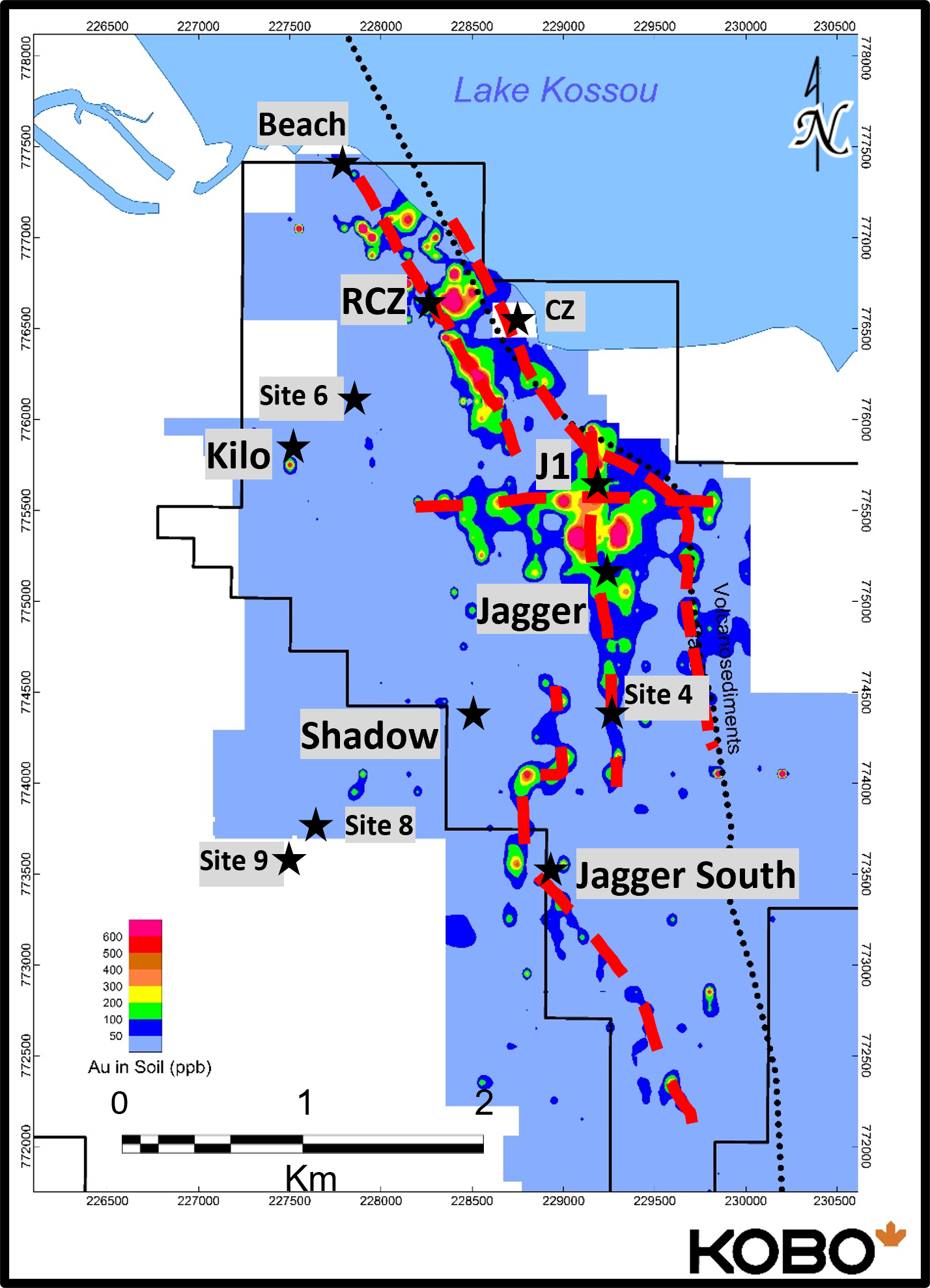 Artisanal miners have been exploiting gold in quartz veins hosted within volcanic rocks at Shadow . The trench has been exploited over 350 meters along strike and the main vein is up to 2 meters wide with significant alteration in the host volcanic rocks that remain untested. 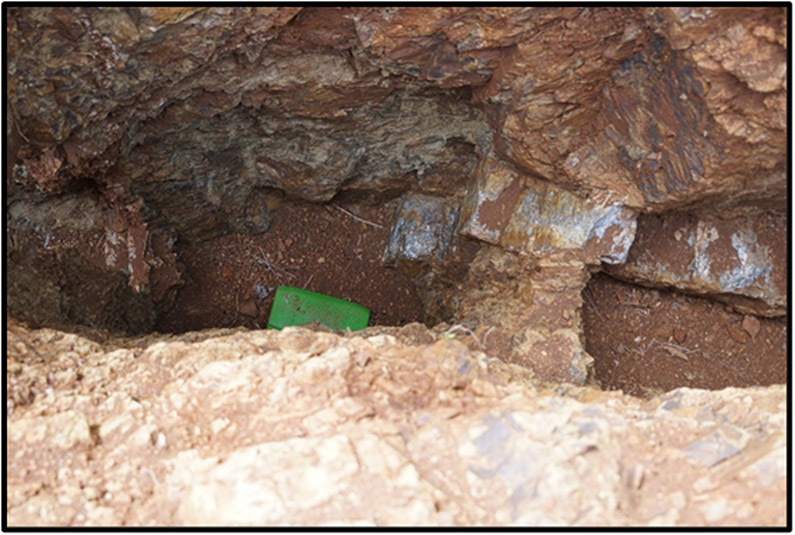 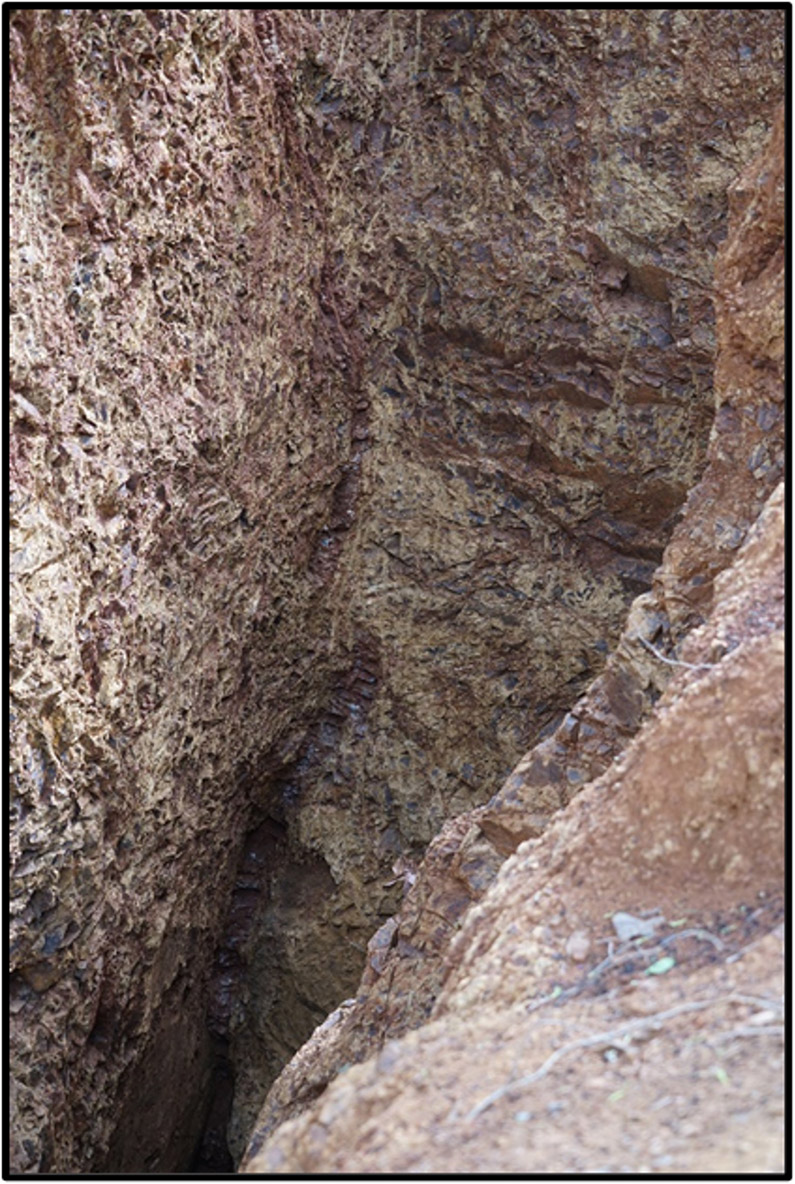 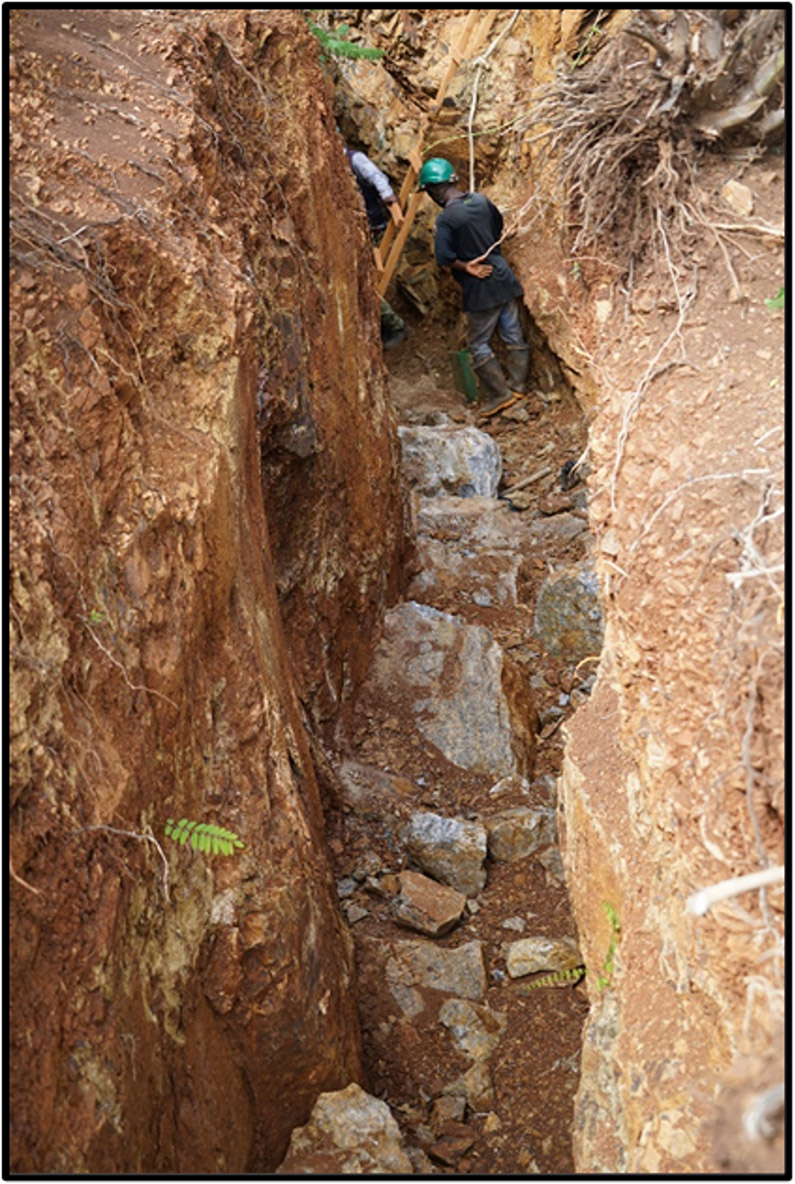 At Kilo, artisanal miners are targeting a series of narrow, 10-20 cm wide, sub-vertical E-W oriented quartz veins. Field observations have shown the presence of four separate E-W vein systems being mined within a 45 metre wide zone.  Overall the zone has been exploited over a distance of approximately 600 meters. 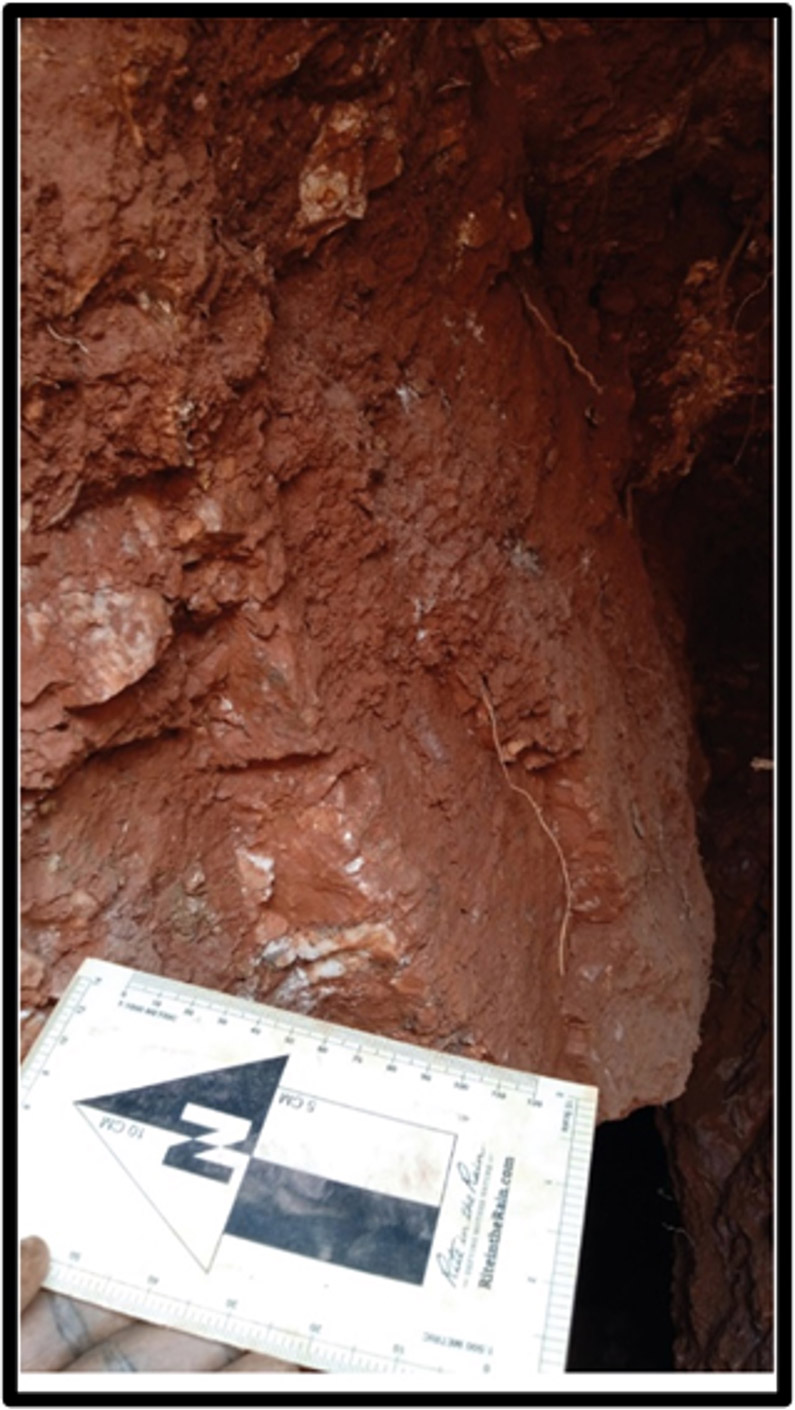 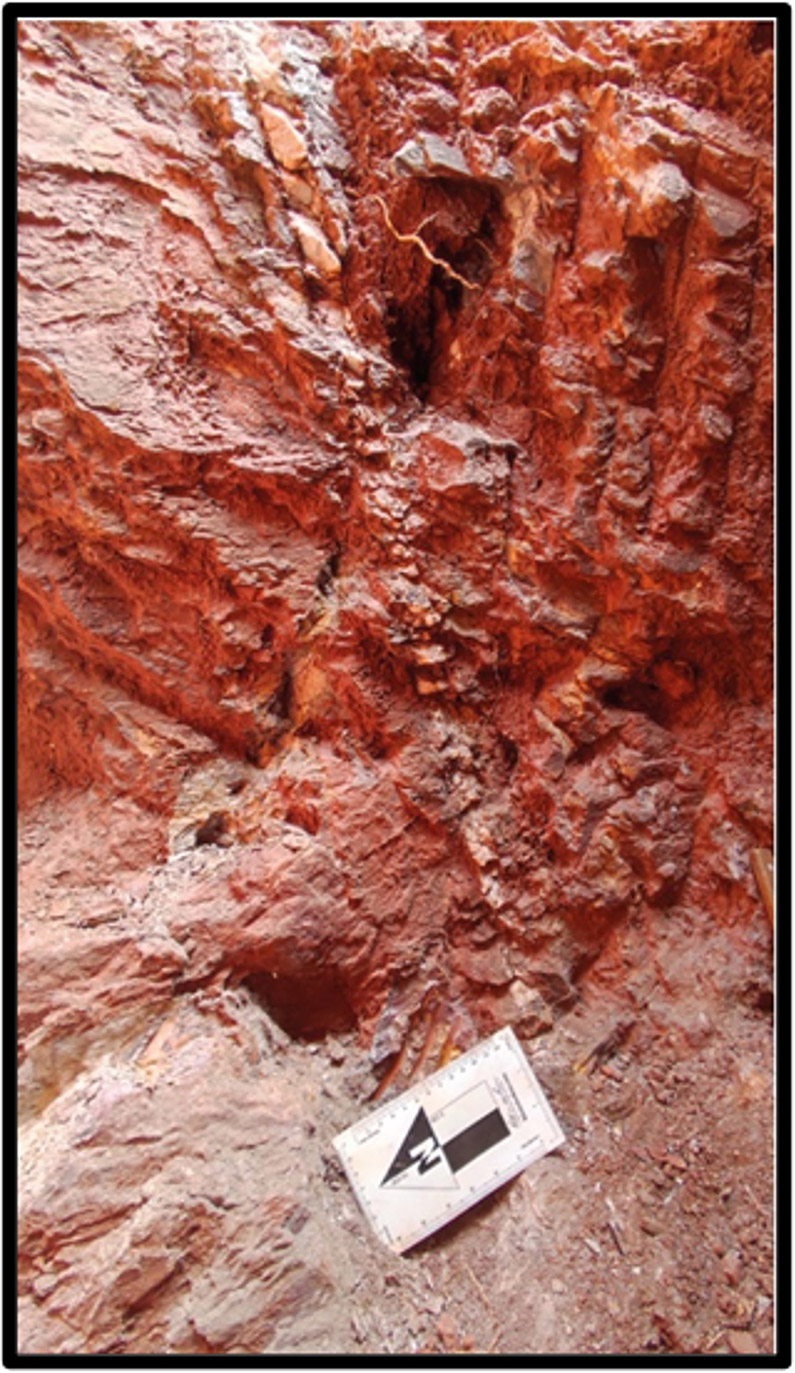 Between August 13 and August 28, 2020, a 1,195.4-line kilometres Unmanned Aerial Vehicle (“UAV”) magnetic survey was completed over a portion of the permit by MWH Geo-Surveys International Inc. of the USA (“MWH”). MWH utilized a DJI M600 Pro drone, a Geometrics MagArrow (cesium vapor magnetometer) and GEM System GSM19 base station. Survey lines were flown on 50 m spacing and at a mean terrain clearance of 62.3 m. 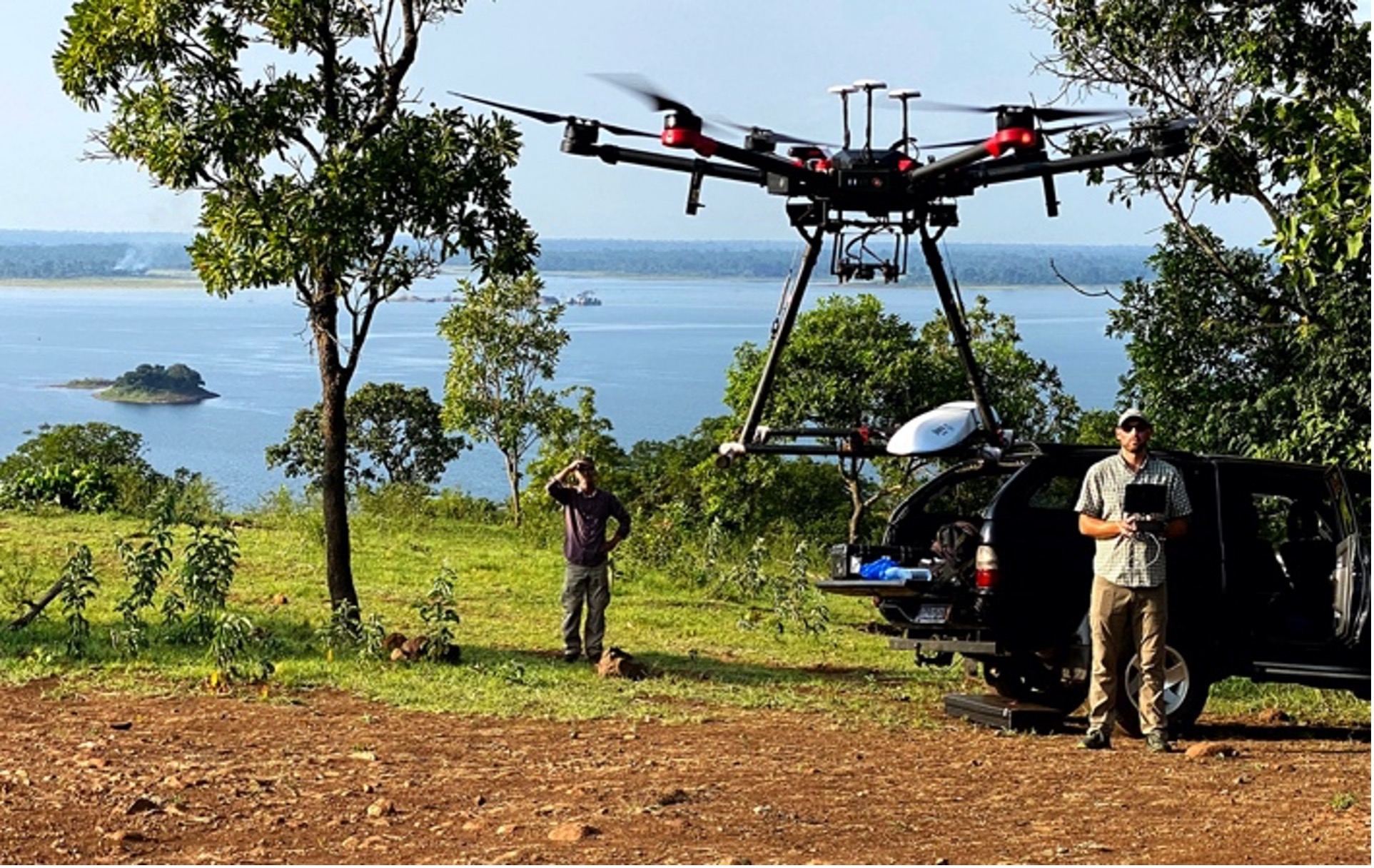 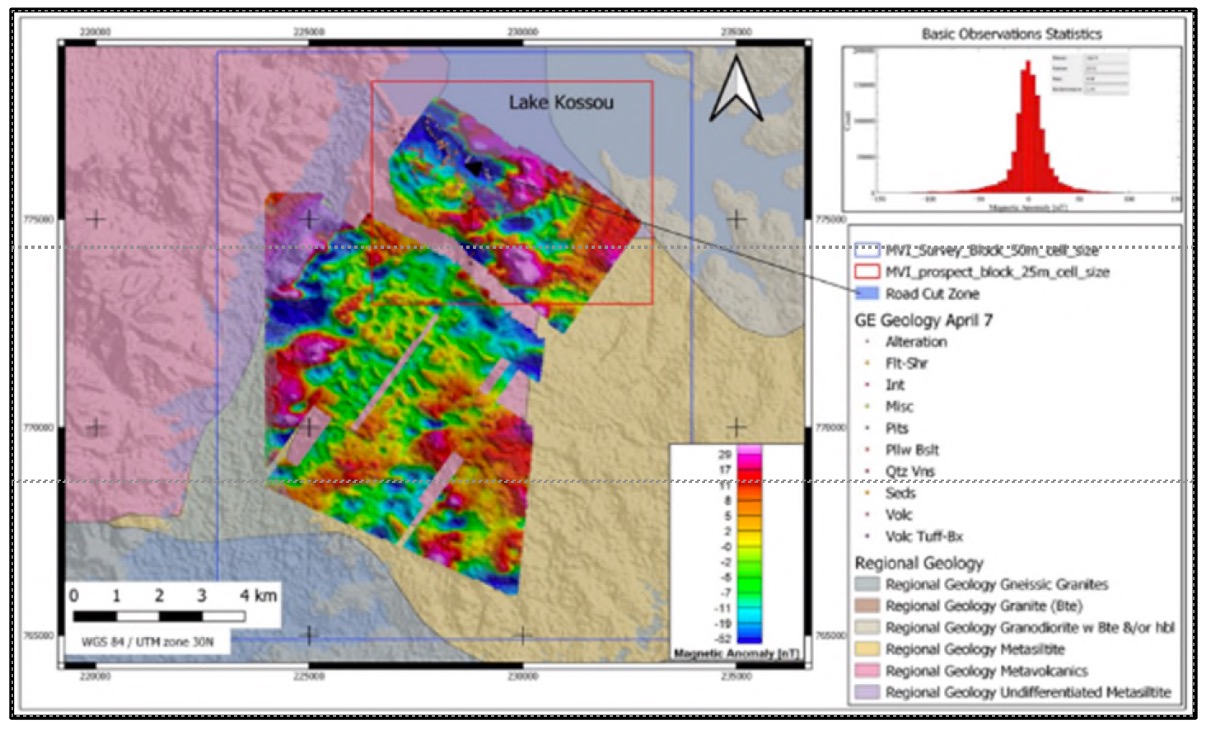 Processing and analysis of the survey results have shown good correlation with geochemical results and have aided in an advancement of the geology of the project, including 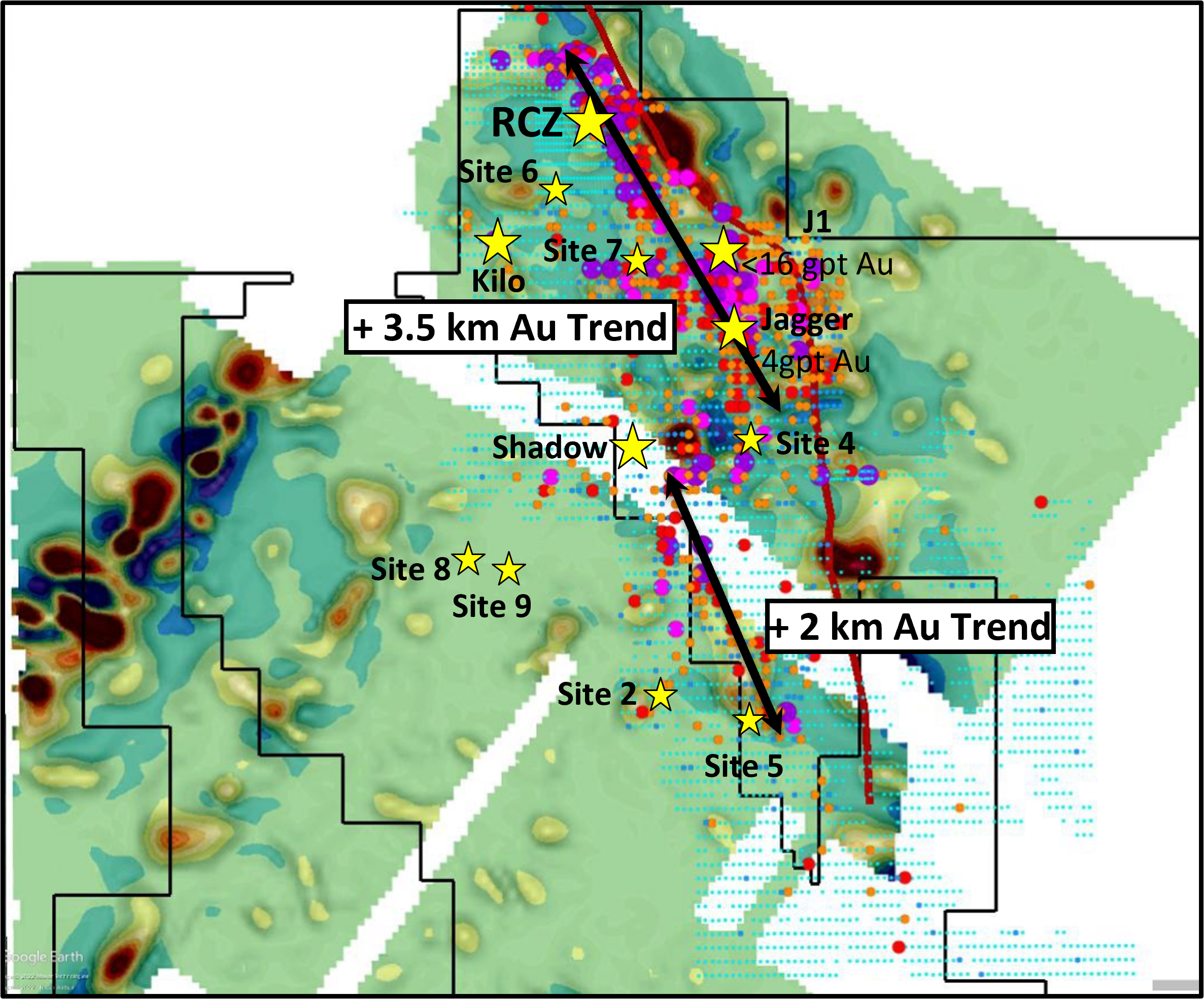 In March 2021, Kobo contracted InnovExplo to carry out a field mapping and a structural study to gain a better understanding of the local geological environment and controls on mineralization.  Result of the study were very positive.

Geological observations and structural data indicate a structural corridor that links kn showings and is coincident with both the magnetic interpretation and rock and soil sampling results.  The work also postulated a second structural corridor west of the main area of interest, linking the newly discovered Kilo and Shadow zones.

Gold mineralization occurs within quartz and quartz/carbonate veins/veinlets and disseminations in the host volcanic rocks associated with tensional ‘en echelon’ and conjugate shear and fracture networks. 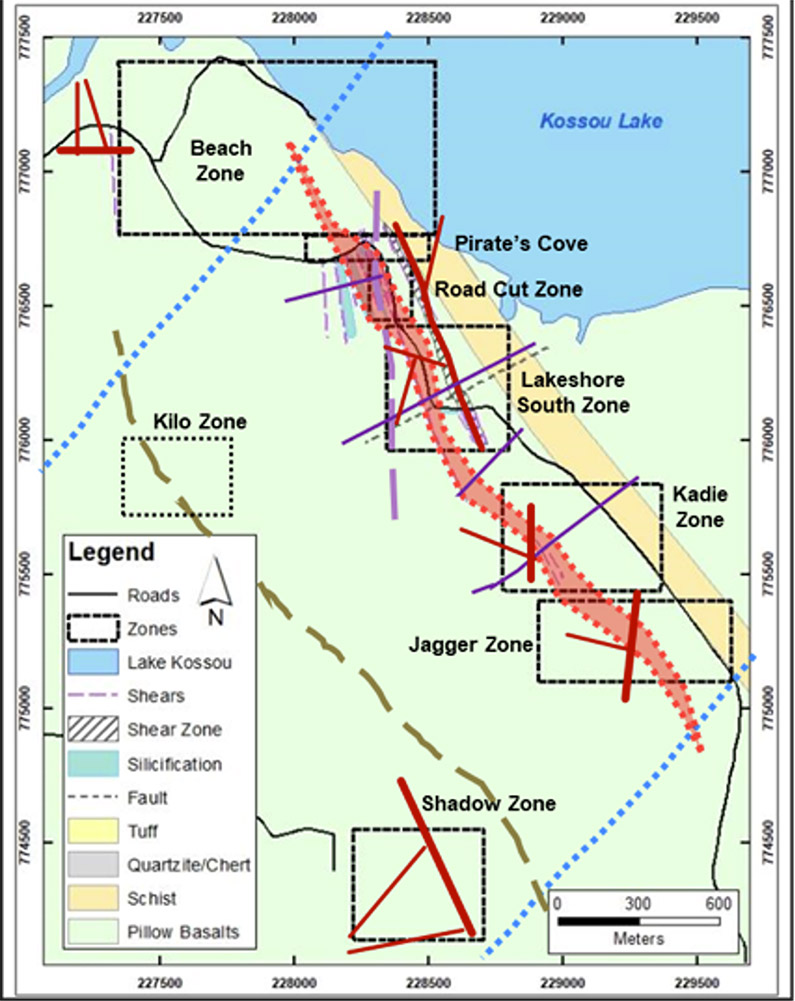 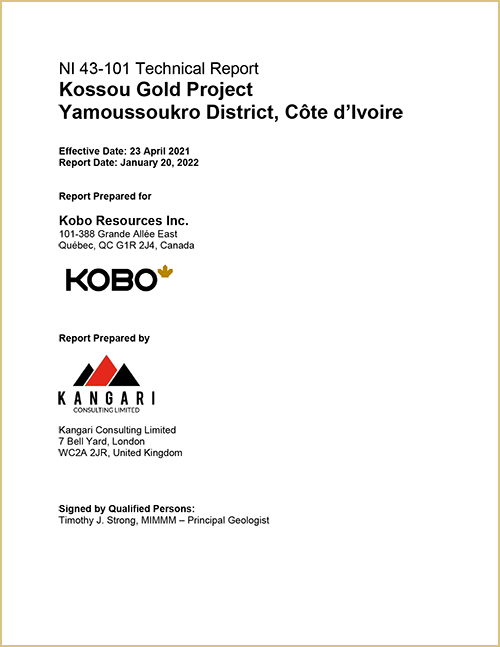